We searched for a while for ceiling planks that were really thin, because we wanted something lightweight and something not to take up too much headroom. Eventually we came across some knotty pine wainscoting wall planks. It seems it’s the kind of thing you can’t find online and you have to search in the store. We painted them white a few months ago and were eager to get them up into the ceiling.

We used Sikaflex 221 to glue the planks to the luan ceiling we had installed and brad nails. After much experimenting with staples vs brad nails, we went with 18 gauge ⅝ Brad nails. The staples were too powerful for our skinny planks and would just destroy the wood.  Even with the brad nails we had to dial the compressor down to 60 PSI as we shot the nails into the tongue of the plank or else it would just shoot straight through the plank and out the other side.

We had started by making a centerline down the ceiling with a chalk line.  Nothing in the bus is symmetrical, so we found it was easiest to establish a clear center line and begin installing our planks from the center out to the sides.  This achieved a nice even seam down the center of the bus. The challenge of doing it this way, rather than starting from one side and making your way across the ceiling as you would in a regular house, was that as you went down one side you could nail into the tongue but the other side you had to nail into the groove which was a little more challenging.

We were able to stagger our planks which we would not have been possible if we had not initially installed our luan ceiling. If we had been attaching directly to the furring strips, we would have had them all the same length so the ends would attach to the furring strip, creating seam lines across the ceiling. Staggering looks much nicer!

To cut our planks down to size we used a jigsaw, cutting from the underneath side to create a nice clean cut on the front side. We left all our skylight, fan and emergency hatch openings fairly rough. Later we will clean these up with a wood router and finish the edges.

To cut holes for our lighting, we used a hole saw.  This we cut from the front side for a clean cut, the rough side will be underneath.

These skinny planks definitely had some cons to them, but the pros do outweigh the cons for us.  It just depends what kind of aesthetic you are going for on your ceiling:

Overall, we are really happy with how our ceiling turned out.  We definitely have some touch ups to do and some holes to fill, but we’ll do the finishing touches later on in the build.

Up Next
While we were eager to get our ceiling planks up, we decided to give our necks a break from looking up and install our walls next.

Some of the links we share are affiliate links, which means that if you choose to make a purchase, Rehabit8 will earn a small commission. This commission comes at no additional cost to you. Please understand that we have experience with all of the products we post and share them because they are helpful and useful, not because of the small commissions we make if you decide to buy something. Please do not spend any money on these products unless you feel you need them or that they will help you achieve your goals. 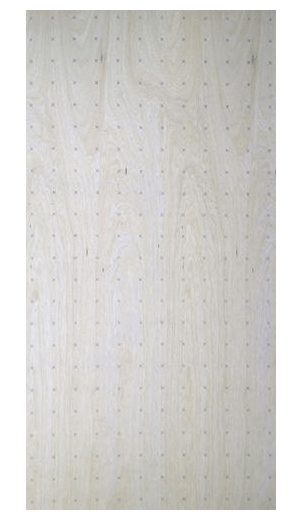 IntegraPLY Underlayment
This underlayment is commonly used for under carpet, vinyl and laminate floors as well as ceramic tile. They are 4 x 8 boards that are only ¼ inch thick making them easy to bend into the curved ceiling. Sikaflex
With temperatures dropping, we found the best solution for adhering our CereTex to our bus beams was to use SikaFlex. We have a few SikaFlex 220 tubes and used just a little bead to hold the ceramic paper firmly. Mela and Don are sharing their journey as they make conscious decisions to live a more healthy, environmentally friendly life together.

View all of Mela & Don's posts.